It's a more beautiful 'Neighborhood' when Mister Rogers is in it

(CNN)Tom Hanks becomes Mister Rogers in "A Beautiful Day in the Neighborhood," a movie that's pretty magical whenever he's on the screen, and fairly mundane when he isn't.

Sony is shrewdly marketing the movie as the film we need right now, a warm blanket of kindness. That feels true, but it's hard not to wish that the story was as consistently good as the man -- and performance -- at its center.

Then again, the problem there is that the main character isn't really Rogers, but rather Lloyd Vogel ("The Americans'" Matthew Rhys), a fictionalized stand-in for magazine writer Tom Junod, whose article about his experience meeting Rogers -- and the spiritual journey of healing and self-discovery that went along with it -- provides the foundation for the film.

An investigative reporter, Mike is married to Andrea ("This is Us'" Susan Kelechi Watson) and has a baby son when he's assigned a 400-word profile of Mr. Rogers, who he quickly dismisses as "the hokey kids show guy."

What follows, though, is Mike's awakening, which leads to him addressing his long-simmering anger toward his estranged father (Chris Cooper), while the audience sees Mr. Rogers through the writer's skeptical, jaded eyes.

"I don't know if he's for real," Lloyd says early on, before his encounters with Rogers -- not exactly interviews, since the host spends as much time peppering him with questions -- begin to erode that resistance.

Even for a movie set in the late 1990s, it's hard to imagine a magazine ponying up for frequent trips to Pittsburgh for what's designed to be such a modest piece. 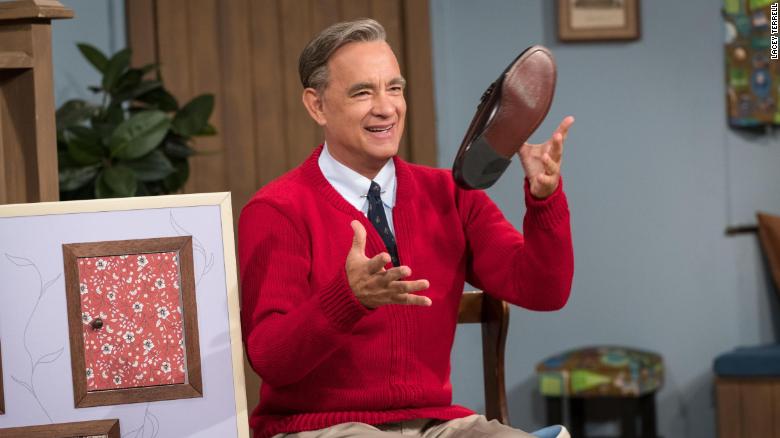 Tom Hanks as Mister Rogers in 'A Beautiful Day in the Neighborhood' (Lacey Terrell)
Such quibbles, however, are clearly intended to be glossed over by the movie's generosity of spirit, and moments like people spontaneously bursting into song at the sight of Mr. Rogers, sequences as difficult to resist as the man himself.
The main drawback to "A Beautiful Day in the Neighborhood" -- directed by Marielle Heller ("Can You Ever Forgive Me?"), from a script by Micah Fitzerman-Blue and Noah Harpster -- is that it tends to leave you craving more about Fred Rogers, and less about Lloyd. In that respect, it perhaps works best when viewed in conjunction with "Won't You Be My Neighbor?," the recent documentary about Rogers and his show, or the PBS special "Mister Rogers: It's You I Like," which covered similar territory.
There is a sense of whimsy throughout, which includes framing the movie like an episode of Rogers' TV show, every detail of which is replicated in meticulous detail.
Yet even allowing for that device, almost everything about Lloyd's arc has a slightly cliched ring to it, while the fleeting insights into Rogers -- how he personally dealt with anger, or parenting his sons -- somehow feels fresh. Give much of the credit there to Hanks, who manages to capture the host's soothing, sing-song voice without ever drifting into caricature.
The temptation is nevertheless simply to give in to the movie, which is perhaps as it should be. Mr. Rogers, after all, taught us to accept people as they are. Sitting back, slipping into a comfortable sweater and shoes and enjoying "A Beautiful Day in the Neighborhood" is no different.

"A Beautiful Day in the Neighborhood" premieres Nov. 22 in the US. It's rated PG.